Donslund Mill is one of the four old water mills that existed in Billund Municipality. The mill was directly linked to the main farm Donslund and is probably built in the late 1500s with the farm. The mill was first mentioned in written sources in 1664. The oldest cadastral map from around 1800 shows that Donslund mill included several buildings that were located by the road from Hejnsvig. In the 1800s, got the mill also got Inn status and permission to distil spirits, and there was dye-factory on site. 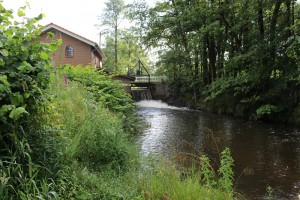 Today, the Donslund Mill a stately, brick farmhouse, a stable / barn from 1928 and a turbine and weir and mill pond. The buildings are a little low in the landscape, and after road bypasses Donslund city and the mill is the old mill plant slightly tucked off the beaten track. But Donslund Mill is a fine, small cultural environment.

The main building was rebuilt in 1927, and the loggia like extension with dormer at the front door and the nice curved gables follow the current building method that was inspired by Art Nouveau.

The Turbine house is located at the old water mill area – east of the main building and quite close to doing so. Turbine house was built in the 1980s. Donslund mill was not in operation in the early 1920s, but was rebuilt / restored in 1927, while there was erected a turbine to produce electricity. Grinding of grain on Donslund mill ceased around 1930th

The water from the mill pond has a big drop down ladder table down to a small outbuilding on the turbine housing eastwall, where there is a large water wheel. Otherwise, there is preserved mill fixtures in the building.

Millpond is located northeast of the turbine housing. The old road goes between the turbine housing and the mill pond. A bridge leads over the mill channel and climb the table is located at the bridge.
Landevejens old course to the southeast is preserved in a nice long stretch from the mill until the new road. The old road is bordered partly by high cement stone, partly with newer low, red-white cement stone.

In 1930 there was built a fish farm at Donslund Mill.
All in all, Donslund Mill an atmospheric environment. The large pond and the sound of water falling over the riser board toward the turbine housing is highly evocative elements in this environment, but also the old road that leads through the low, humid landscape – an area which was once wet meadows Ansager Å – gives a special atmosphere in the environment.

In addition, the elements included in the cultural environment by Donslund Mill, have narrative value. There is a direct and clear connection between the mill pond, climb the table and the turbine housing. Mill Canal and dropped down towards the turbine housing can even be observed from the old bridge over the canal. This makes it easy to understand how in earlier times have exploited hydropower as traction – first grain mill and later for the production of electricity ..

The turbine’s stately main building, which in its basic structure is a 1,800-century house, witness to the solid prosperity that prevailed in many watermills, and confirms that the miller was an important person and a respected man in the older rural communities.

Finally turbine location at an old road, the mill was an important meeting place. By Donslund Mill emphasized that there a number of belonged an inn to the mill.

Since water turbines gradually gave way to modern energy were many places in Western Jutland up fish farms in the old mills. The fish farm at Donslund Mill is an example of this development and has therefore also some interesting history.